First Community Bank Celebrates Over 100 Years of Community Banking
A Proud Tradition of Local Family Management that Spans Five Generations
The story of First Community Bank starts with an Irish immigrant named William J. Clarke. Clarke left his native land in 1872 to seek his fortune in Canada. In 1876, he moved to Harbor Springs, at that time a thriving lumber town.
In 1896, Mr. W. J. Clarke built the three story brick building which has served as the Bank's Harbor Springs main location since it was founded. In 1905, Clarke took the necessary steps to obtain a bank charter from the State of Michigan, and on November 1st of that year the Bank opened for business under the name of Emmet County State Bank. The Bank became a member of the Federal Deposit Insurance Corporation in 1933 and a member of the Federal Reserve System in 1937.
In 1975, the Bank changed its name to Harbor Springs State Bank. In 1993, as the result of expansion into the adjoining community of Petoskey, the name was again changed to First Community Bank. In 2000, First Community Bank expanded to the community of Cheboygan and in 2006 expanded to the community of Traverse City. Most recently, in 2012, First Community Bank established an office in downtown Grand Rapids following a merger with Select Bank.
William J. Clarke was eventually succeeded as President of the Bank by his son James T. Clarke. James T. was then succeeded by his son James H. Clarke. His son Robert W. Clarke became President in 1975 and presently is Chairman of the Board. In 1998, Matthew R. Clarke, representing the fifth generation joined the Bank and is President. In 2002, Daniel J. Clarke, also representing the fifth generation joined the Bank and is serving as CEO. 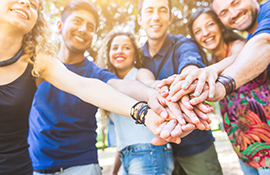 For over a century, we have focused on the best decisions for our community.